05) Death to My Hometown

10) Land of Hope and Dreams 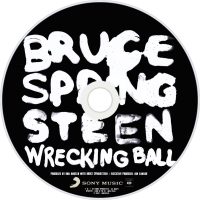 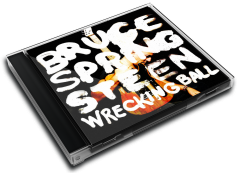 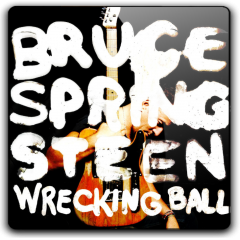 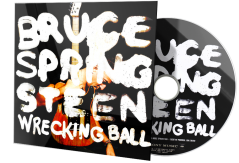 Wrecking Ball is the seventeenth studio album by American recording artist Bruce Springsteen, released March 5, 2012, on Columbia Records. The album's first single, "We Take Care of Our Own", was released on January 19, 2012. Another song, "Rocky Ground" will be released to select record shops on 7-inch as a Record Store Day exclusive on April 21, 2012. The album's third single, "Death to My Hometown" was released in May 2012.

The album debuted at No. 1 in 16 different countries including both the US and UK charts with approximately 196,000 and 74,000 records sold, respectively. "Wrecking Ball" became Springsteen's tenth No. 1 album in the United States, tying him with Elvis Presley for third-most No. 1 albums of all-time. Only the Beatles (19) and Jay-Z (12) have more No. 1 albums.

The album includes what may be the final tracks featuring Clarence Clemons, who died in June 2011. Clemons performs the saxophone solos on "Land of Hope and Dreams", and backing saxophone rhythms on the title track.

While the tour in support of the album will feature the full current E Street Band lineup, the only E Street Band members to appear on the album are Clemons, Steven Van Zandt, Max Weinberg, and Patti Scialfa; adjunct members Charlie Giordano and Soozie Tyrell are also heavily featured. The album features members of the Sessions Band, including the horn section, and special guest appearances by Tom Morello and Matt Chamberlain.

User Album Review
On Easy Money, the second song on Wrecking Ball, Bruce Springsteen does as he often does: he licks the air and takes the temperature of the age. "We’re going on the town now," he sings, "looking for easy money." He then adds that "When your whole world comes tumbling down… all them fat cats, they’ll just think it’s funny." If in years to come seats of high learning devote degree courses to Springsteen’s work, there may well be a credit to be earned examining just why, when it comes to lyrics, there are no flies on The Boss.
For years now he and his E Street Band have toured in a private jet; in 2009, a special plea had to be made for him and the group to appear at Glastonbury, as that festival’s appearance fees are markedly lower than he is used to. The man is, by any measure, a member of the Golden Circle of Rock Stars. But at no point in his towering career has there ever been the impression that the songs Bruce Springsteen sings come from the mouth of a multi-millionaire.
The release of Wrecking Ball ushers in another remarkable notion: that when married to its two predecessors – 2007’s Magic and Working on a Dream, released two years later – Springsteen currently finds himself in a vein of form equally as rich as that mined in the period between 1975 and 1980, covering the classic albums Born to Run, Darkness on the Edge of Town and The River. But while the emotional parameters are here the same as they ever were – characters in pursuit of love and justice told from a viewpoint of instinctive moral alliance with the underdog – musically this is a work that is as varied and surprising as any to which its author has placed his name.
It may be odd that despite his worldwide appeal, and his experience of this world, Bruce Springsteen never takes his stories outside of the USA – here the settings stretch from New Jersey’s Meadowlands to the New Orleans Superdome, but not much further. But when it comes to the songs that carry these stories, the range is rich and varied. Taking his cues from the Celtic feel of We Shall Overcome: The Seeger Sessions, as well as heartland rock and the soul music of urban America, this is the sound of disparate compositions that somehow exist in a unified setting.
Featuring contributions from (among others) Rage Against the Machine’s Tom Morello as well as the late Clarence Clemons, by way of the Victorious Gospel Choir, Wrecking Ball is a work of commanding range and masterful execution. The fact that it comes from a man who exclusively seems to become more commanding with age only adds to its magnificent appeal.