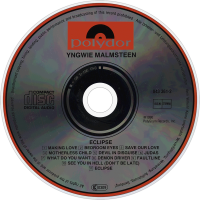 Eclipse is the fifth studio album by guitarist Yngwie Malmsteen, released in 1990 through Polydor Records. It reached #112 on that year's Billboard 200 chart and remained charted for six weeks.