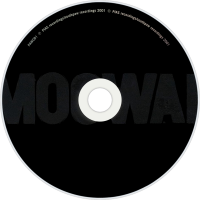 Rock Action is the third full-length studio album by Scottish post-rock band Mogwai.
Rock Action brought with it some changes to Mogwai's sound that they would continue to develop later, including the use of electronic instruments. While song structures on this album are typical of the band in most cases and respects, some of the contrasting dynamics have been toned down slightly and many of the songs focus more on texture than on structure. For the first time, Mogwai utilised synthesizers, expanding their timbral palette.
The single "Dial: Revenge" fills much the same role that "Cody" did on Come on Die Young,[not in citation given] featuring Welsh vocals from Gruff Rhys of Super Furry Animals. When the inside cover is unfolded, part of the logo for Mwng, an album by Super Furry Animals released the previous year, can be seen. Gruff Rhys has said of the song title "I think (Mogwai) were into me writing in Welsh, because they're an instrumental band and they wanted a singer who would be just sounds for most people. Back then, people were still using payphones. When you take a payphone off the hook, on the LCD screen it flashes 'DIAL'. But in Welsh, dial – pronounced 'dee-al' – means revenge. It puts you in a weird place when you're making a phone call. So the song was about that.".
The tone of Rock Action is somewhat less dark than previous works, but maintains Mogwai's cryptic cynicism.
The album was produced by Dave Fridmann of Mercury Rev in New York.