Hardcore Will Never Die, but You Will 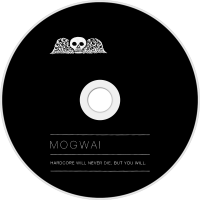 Hardcore Will Never Die, But You Will is the seventh studio album by Scottish post-rock band Mogwai, released in the UK and Europe on 14 February 2011 by Rock Action Records, and in the US on 15 February 2011 by Sub Pop.
The album's cover art is a photo of New York City as seen from the Hudson River. The inspiration for the closing track's title, "You're Lionel Richie", comes from what a hungover Stuart Braithwaite said when he ran into the singer at an airport.