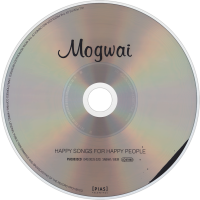 Happy Songs for Happy People is the fourth full-length studio album by Mogwai. It represents a further evolution of Mogwai's toned down, more electronic sound: all songs are based on electric guitars and live drums, but synthesizers are used frequently and often take the main stage on this album, with strings and piano also making the occasional appearance. The songs on the album are subdued, with the only exceptions being the towering "Ratts of the Capital," and the closer "Stop Coming to My House".
Mogwai's usual vocalist Stuart Braithwaite does not sing on this album at all. Barry Burns ("Hunted by a Freak", "Killing All the Flies") and John Cummings ("Boring Machines Disturbs Sleep") accept vocal duties, however nearly all the vocals are heavily processed and incomprehensible.
The CD also contains a demo version of Cubase and the individual tracks for each instrument in "Hunted by a Freak" allowing remixing and reconstructing of the song.
The pre-release MP3s of this album circulating on the net had a sample of "Happy Tree Friends" cartoon main theme mixed in at the end of the last track. Some of the fans were frustrated buying the released CD afterwards and not finding the sample there.
It was the first Mogwai album to appear in the US charts, spending one week on the Billboard 200 at #182.
A computer animated video was released for the song "Hunted by a Freak", depicting a person throwing pets to their death.