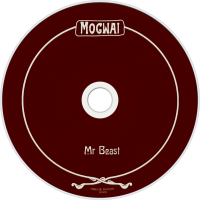 Mr. Beast is the fifth full-length studio album by the Scottish post-rock group Mogwai.
The album Mr. Beast was released on March 6, 2006 in the UK and March 7, 2006 in the United States, in double LP vinyl format, a regular CD jewel case edition and limited deluxe edition package that comes with both the album on CD and a DVD documenting the recording process entitled The Recording of Mr. Beast. The album has been described by Creation Records head Alan McGee as "...probably the best art rock album I've been involved with since Loveless. In fact, it's possibly better than Loveless." referring to the influential 1991 album by My Bloody Valentine. Drummer Martin Bulloch describes it as “...the best record we've made since Mogwai Young Team.” The album's title stemmed from an incident where Barry Burns and Dominic Aitchison landed in Florida to start a tour with The Cure in 2005, when they saw a taxi driver standing outside the airport holding a sign that said "Mr. and Mrs. Beast" which, after a 10-hour flight, was "funnier than life itself".