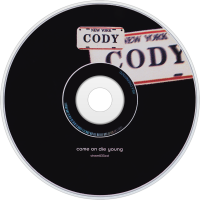 Come On Die Young (also known as CODY), is the second full-length studio album by the Scottish post-rock band Mogwai, released on 29 March 1999 by Chemikal Underground.

It is somewhat different from the rest of Mogwai's work because of its reserved tone. The album's second track, "Cody" is much more like a traditional pop song than most of the band's repertoire. Still slow and meandering, it features an uncharacteristically distinct melody, slide guitar and relatively prominent vocals. Much of Come On Die Young consists of slow, quiet, drum-driven tracks containing tense, feedback-laden crescendos and occasionally ambient textures. Near the end of the album, the bombastic "Christmas Steps" breaks away from this quiet tension and displays a return to Mogwai's more well-known distortion-heavy dynamics. The album's title derives from a Glasgow gang of the same name.