The Hawk Is Howling 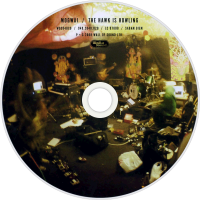 The Hawk Is Howling is the sixth studio album by Scottish post-rock band Mogwai, released on 22 September 2008 through Wall of Sound, Play It Again Sam, and Matador in the UK, Europe, and the USA, respectively. It was released in Australia through Spunk Records on 27 September 2008.
It is their first album to feature exclusively instrumental songs, since their earlier albums all have had vocals (singing or spoken word) on some tracks.
The album peaked at number 35 in the UK Album Charts and 97 on the Billboard 200.
The album was recorded and produced by Andy Miller at Chem19 Studios in Hamilton, South Lanarkshire, Scotland and mixed by Garth Jones at Castle of Doom Studios in Glasgow, Scotland between September 2007—March 2008. The album marks the first time in ten years that the band worked with Andy Miller, and at Chem19 Studios, since recording the song "Small Children in the Background" for the No Education = No Future (Fuck the Curfew) EP in May 1998.
Several new compositions were debuted at a show for the Triptych Festival at Tramway in Glasgow, Scotland in April 2008—"The Precipice", "I Love You, I'm Going to Blow Up Your School", "I'm Jim Morrison, I'm Dead", "Thank You Space Expert", "Batcat" and "Scotland's Shame".