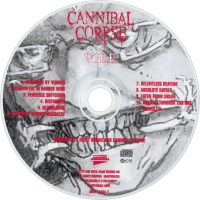 Vile is the fifth studio album by American death metal band Cannibal Corpse. It was released in 1996 through Metal Blade Records. It was originally titled Created to Kill (which is featured in the Cannibal Corpse Box set) and was recorded with founding vocalist Chris Barnes. Before the album was released, Barnes was kicked out of the band, which then brought in Monstrosity vocalist George "Corpsegrinder" Fisher to finish the album's vocal work. Fisher re-recorded all of the vocal tracks and the band released the album under the new title Vile. Vile also marks the last album featuring guitarist Rob Barrett until Kill, and features a brand new band logo, because the previous logo was owned and trademarked by the departing Chris Barnes.