Track List
01) Part of the Machine
02) Through Different Eyes 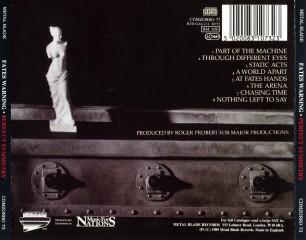 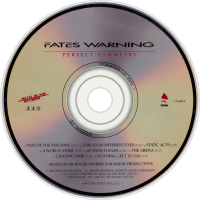 Perfect Symmetry is the fifth studio album by progressive metal band Fates Warning, released in 1989 through Metal Blade Records; a remastered edition was reissued on June 10, 2008 together with a bonus disc containing studio demos, as well as a DVD of live performances from the 1989–90 Perfect Symmetry world tour. It was with this album that the band's more modern, progressive direction was established.

Album Review
This was the recording that established Fates Warning as a progressive band. Their metal influences still dominate the group's overall sound; however, Mark Zonder's unique approach to drumming adds another level of depth and credibility to the music. His double bass, odd-time introduction to "Part of the Machine" is the session's defining moment, "Through Different Eyes" is a catchy song that provides insight into the band's future pop/metal direction, and "Static Acts" still stands as one of the most aggressive songs the band ever recorded. Ray Alder's aggressive singing has a genuine quality which allows him to legitimately convey his anger and pain without sounding clichéd. "A World Apart" is one of the weaker songs here; however, there is some impressive odd-metered drumming from Zonder. "At Fates Hands" has become one of the band's classic songs, and for good reason. The incorporation of the violin and piano provide a refreshing change from the overall metallic sound. While Alder and Zonder prove here that the band is capable of achieving many different moods and sounds, the instrumental section of the song reveals that both Jim Matheos and Frank Aresti are still dependent on their metal guitar style. The most powerful song in terms of lyrics, singing, and playing is "Nothing Left to Say," which stands as the band's high-water mark. An historic recording in the progressive metal genre.