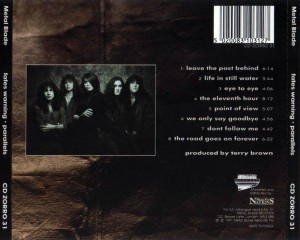 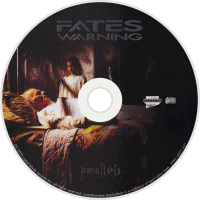 Parallels is the sixth studio album by American progressive metal band Fates Warning, released on October 29, 1991 through Metal Blade Records. The album reached No. 20 on the U.S. Billboard Heatseekers chart.
James LaBrie, who had recently joined Dream Theater, contributed background vocals on the song "Life in Still Water." On March 16, 2010 a special edition of Parallels was released through Metal Blade. This included a remaster of the original album, a bonus disc of live and demo tracks, as well as a DVD.

Album Review
Possibly Fates Warning's biggest commercial if not artistic success, 1991's Parallels was ironically also the closest the Connecticut natives ever came to sounding like their nemesis, the wildly popular Queensrÿche. Of course, most old-school fans were none too pleased about the group's increasingly concise and restrained songwriting style, but this change actually represented an important sign of maturity (if in a reverse kind of way), as it proved that the band was learning to appreciate the merits of forgoing wild showmanship in the best interest of a seamless, well-constructed song. As such, excellent singles "Eye to Eye" and "Point of View," along with beautiful power ballad "We Only Say Goodbye," brought the band more radio and MTV exposure than ever before, or after. And in keeping with tradition, the band still whipped out a few extended compositions ("The Eleventh Hour," "Life in Still Water") more in tune with its progressive metal past (and future). While definitely not the most representative album of Fates Warning's classic sound, Parallels remains an ideal first purchase for fans of traditional '80s metal. [In 2010 Metal Blade reissued the album in a Deluxe Edition with a bonus CD featuring six live tracks from the Hollywood Palace in 1992 and six more pre-production demos of album tracks. In addition, there is a bonus DVD that includes a documentary on the making of Parallels, videos for "Point of View" and "Eye to Eye," and an entire live show from New Haven, CT, in February of 1992.