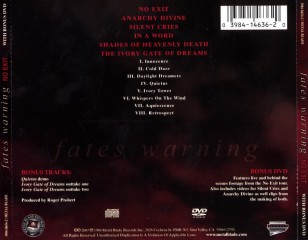 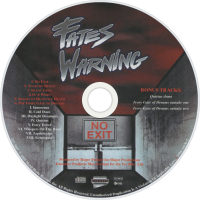 No Exit is the fourth studio album by progressive metal band Fates Warning, released in 1988 through Metal Blade Records. It is the first Fates Warning album to feature current singer Ray Alder, who replaced John Arch after the release of Awaken the Guardian (1986), as well as the last to feature drummer Steve Zimmerman, who left the band just prior to the recording of their subsequent album Perfect Symmetry (1989). The album's title was inspired by No Exit, a 1944 play written by French philosopher Jean-Paul Sartre.

Album Review
Usually regarded as the finest release from Fates Warning's early years, when their progressive leanings were tempered with no small amount of classic metal riffing, No Exit is a typically difficult album to come to grips with. As was often the case on prior releases, the band has a hard time reconciling its ruthless experimentation with the need to construct coherent songs, leading to any number of awkward passages in which melodies and riffs are recklessly spliced together. Still, the album is another step forward, and tracks like "Anarchy Divine," "Shades of Heavenly Death," and "In a Word" rank among the best of their career thus far. Side two is entirely taken by the daunting "The Ivory Gate of Dreams," which at over 20 minutes and eight separate parts, finds the band in its most extreme and complex progressive metal mode. Like his predecessor, new vocalist Ray Alder's piercing screams are something of an acquired taste (coming off like a less disciplined version of Queensrÿche's Geoff Tate), but the rest of the band perform to their usual high technical standards.