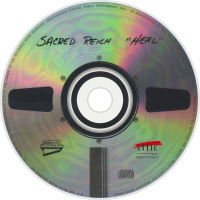 Heal is the fourth and final full-length studio album from the Arizona thrash metal band, Sacred Reich. It was released in February 1996 on Metal Blade Records and follows the 1993 album, Independent. The band's final album was a 1997 live recording, Still Ignorant, which saw the return of original drummer, Greg Hall