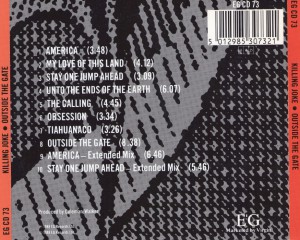 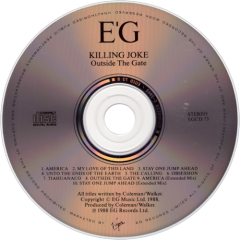 Outside the Gate is the seventh studio album by English post-punk band Killing Joke, released in June 1988 by E.G. via Virgin Records worldwide. It was a significant stylistic departure for the band, with complex synthesised arrangements and less prominent guitar. Tensions within the band surfaced during production in Berlin. Drummer Paul Ferguson was dismissed at the beginning of the sessions and replaced by a studio musician while bassist Paul Raven took part to the recording but ultimately asked his name to be withdrawn from the credits for major disagreement over artistic content. The lead single was "America". Ironically, the album was shelved in the US by Virgin America and didn't receive any release.
In 2008, the album was re-released with bonus tracks, including rough mixes of some songs. The previously unreleased track "May Day" was re-written as part of "Tiahuanaco".