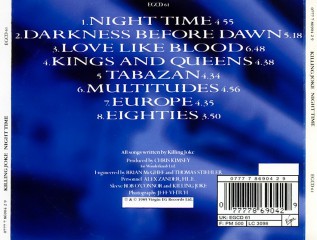 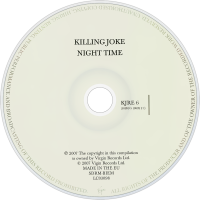 Night Time is the fifth studio album by English post-punk band Killing Joke, released in February 1985 by E.G. through Polydor Records. The album was produced by Chris Kimsey whom the band believed would help to promote the band in America due to his work with the likes of the Rolling Stones.
It was an international hit, reaching number 11 in the United Kingdom in its first week on 9 March, number 8 in New Zealand and number 50 in Sweden.
The album was remastered and reissued in 2008 with nine bonus tracks, including the non-album single "A New Day", a complete version of "Blue Feather" (a song previously only released as an instrumental mix on the B-side to "Love Like Blood") and four tracks from a 1984 Kid Jensen BBC radio session.