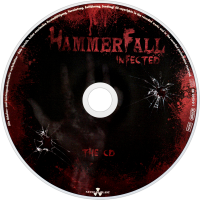 Infected is the eighth studio album by the band HammerFall and was released on May 20, 2011, in Europe and June 7 of that same year in North America. It was their first album produced by James Michael and the HammerFall guitarists Oscar Dronjak and Pontus Norgren. To promote the record, the song "One More Time" was released as the first official single on April 6, 2011. On April 8, 2011, Nuclear Blast Records released a limited edition picture 7" version of the single "One More Time"; the vinyl was limited to 500 copies. The album entered the Swedish charts at number two. The album's second single B.Y.H was released on 24 August 2011.