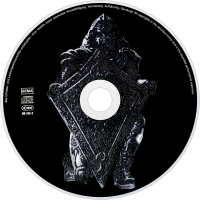 Legacy of Kings is the second album by the Swedish metal band HammerFall. It was released September 28, 1998, on Nuclear Blast Records.

The enhanced CD release included the music video for the track "Let the Hammer Fall", a photo gallery, lyrics for the songs, PC wallpapers and a screensaver, and a Winamp skin only on the Bonus Deluxe Edition. The cover art for this album was painted by Andreas Marshall.