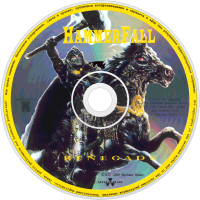 Renegade is HammerFall's third album, the first with the drummer Anders Johansson. It was released on October 9, 2000 ,on the Nuclear Blast Records label. As shown in the tracklist, the founding guitarist of In Flames and founding member of HammerFall, Jesper Strömblad, was the co-writer of several of the songs in the album. The album entered the Swedish charts at number one and was eventually awarded a gold certification.