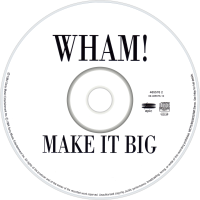 Make It Big is the second album from British pop duo Wham!, released in 1984. The album was a critical and commercial success, hitting #1 in both the UK and the USA and spawning four singles, all topping the charts on both sides of the Atlantic.
Outside the U.S. "Careless Whisper" was credited as a George Michael solo effort upon its release as a single, while "Everything She Wants" was released as a double A-side with "Last Christmas" which would later appear on the following album Music from the Edge of Heaven.
It was certified 6× Platinum in the U.S. within weeks of the album's tenth anniversary.