How Will I Laugh Tomorrow When I Can't Even Smile Today 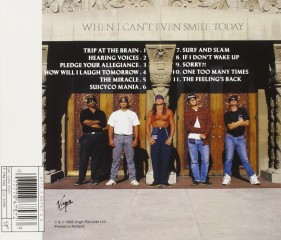 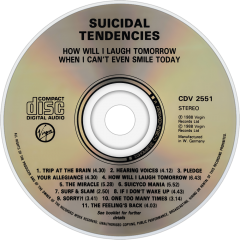 How Will I Laugh Tomorrow When I Can't Even Smile Today is the third studio album by American crossover thrash band Suicidal Tendencies. It was released on September 13, 1988 on Epic Records, the band's first album on that label. It was also their first album recorded with guitarist Mike Clark and their only release with bassist Bob Heathcote, who was replaced by Robert Trujillo in 1989.

How Will I Laugh... is crucial to Suicidal Tendencies stylistic developments in that it sees the band abandoning most of their full-fledged punk influences in favor of a more thrash-oriented sound. One could see this stylistic changes in this album's predecessor Join the Army, but this album had a distinctly more defined metal sound, more complex and lengthy songs, and better production values.

The addition of a rhythm guitarist Mike Clark (who had played with Muir in No Mercy, which was supposed to originally be a metal-only side project) changed the band's style heavily as well. Clark wrote much of the music for this album and gave lead guitarist Rocky George more soloing time, thus creating another factor in this album and future albums' more metal-oriented sound.

How Will I Laugh Tomorrow When I Can't Even Smile Today was moderately successful, peaking at number 111 on the US Billboard 200. It remained on that chart for eleven weeks. The album featured the singles "Trip at the Brain" and the title track, both of which managed to become successful with their target audiences.

In August 2014, Revolver placed the album on its "14 Thrash Albums You Need to Own" list.