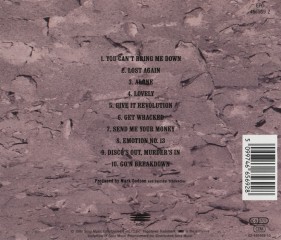 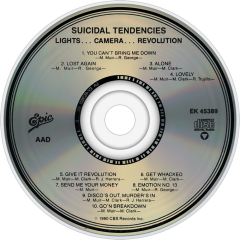 Lights...Camera...Revolution! is the fifth studio album by American crossover thrash band Suicidal Tendencies, released in 1990. This was the band's first release with bassist Robert Trujillo.

This album shows the band straying further away from their roots as a crossover thrash band and moving towards a traditional thrash metal style. The song arrangements are more complex, as are the lyrics. This was also the first Suicidal Tendencies album to display heavy funk influences, which can be attributed to the input of then-new bassist Robert Trujillo.

The album cover was taken at the Vista Theatre located at 4473 Sunset Drive in Los Feliz. It shows Mike Clark, R. J. Herrera and Robert Trujillo standing on top of the theater behind the "Vista" sign, while Rocky George and Mike Muir appear on the top right window of the building.

Singles off this album included "You Can't Bring Me Down", "Send Me Your Money", "Alone" & "Lovely". The video for "You Can't Bring Me Down" received much MTV airplay, and was largely responsible for the success of this album. It was certified gold a few years later. It was also nominated for the "Best Metal Performance" Grammy Award in 1991, losing to "Stone Cold Crazy" by Metallica, whom Trujillo would join in 2003. Loudwire's Eduardo Rivadavia later ranked Lights...Camera...Revolution! at number seven on their top ten list of "Thrash Albums NOT Released by the Big 4".