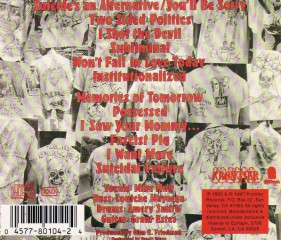 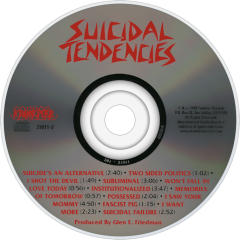 Suicidal Tendencies is the debut studio album by American hardcore punk band Suicidal Tendencies, released on July 5, 1983 through Frontier Records. Regarded as one of the best-selling and most successful punk rock albums, Suicidal Tendencies was well-received by fans and critics alike, and the airplay of its only single "Institutionalized" (for which its music video was one of the first hardcore punk videos to get airplay on MTV) brought the band considerable popularity. The album was a major influence on the then-emerging genre of thrash metal and its subgenre crossover.

"I Shot the Devil" was originally entitled "I Shot Reagan". The band is rumored to have been approached by the FBI to change the name of the song. The group eventually used the original title of the song on the lyrics sheet.

In 1989, due to various royalty and publishing issues with Frontier Records, Muir and the later incarnation of the band re-recorded the entire album and released it in 1993 as Still Cyco After All These Years, with (mostly) faithful recreations of the originals, plus two songs from Join the Army and one previously-unreleased song "Don't Give Me Your Nothin'".

Suicidal Tendencies has been regarded by critics as one of the most influential rock albums of all time, and has inspired a number of musicians. Anthrax guitarist Scott Ian listed it in his "Top 10 Thrash Albums" list, stating "I just think it's a perfect album. Every song on it is great. It's a perfect crossover between hardcore punk and metal, and I guess that's what makes thrash metal -- all those genre combined, and Suicidal were the first ones to do it because that record came out in '83." Suicidal Tendencies has also been cited as an influence or favorite album by each of the "big four" of thrash metal (Metallica, Megadeth, Slayer and Anthrax) as well as California punk bands such as The Offspring and NOFX.

"Memories of Tomorrow" was covered by Slayer for its album Undisputed Attitude and was featured on the Japanese edition of the record. "Institutionalized" was also covered by Senses Fail for the soundtrack to the video game Tony Hawk's American Wasteland. "Two Sided Politics" was covered by Bones Brigade on its album Older Than Shit, Heavier Than Time. "I Shot the Devil" was also covered by the California hardcore punk band Chotto Ghetto on its extended play Shootin' Devils. "I Saw Your Mommy" is featured on the soundtrack to the game Scarface: The World Is Yours for the PlayStation 2, Xbox, and PC. "Institutionalized" is featured in the game Guitar Hero II for the PlayStation 2 and Xbox 360 as a playable song; a member of the most difficult tier, "Face Melters". It was also featured in the film Iron Man (2008) and "Subliminal" was part of the Channel X playlist on Grand Theft Auto V (2013).