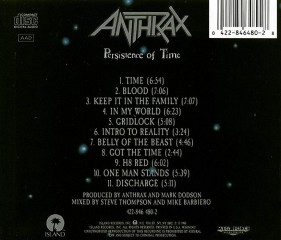 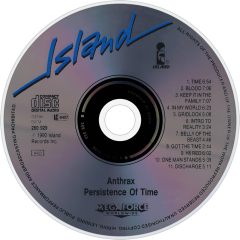 Persistence of Time is the fifth studio album by the American heavy metal band Anthrax. It was released on August 21, 1990 through Megaforce Worldwide/Island Records and was nominated in 1991 for a Grammy Award in the Best Metal Performance category. The album included the singles, "Got the Time" (a Joe Jackson cover) and "In My World" (which was performed by the band on the Married... with Children episode, "My Dinner with Anthrax"). Persistence of Time was the last full Anthrax album to feature vocalist Joey Belladonna until 2011's Worship Music.

Anthrax returned to the studio in the fall of 1989 with Mark Dodson (who produced the previous album, State of Euphoria) to start work on their fifth album. Recording of the album was difficult, with a large structure fire causing the band to lose more than $100,000 worth of gear and their recording studio on 24 January 1990.[citation needed] Following this disaster, the band moved to a different studio in late February of that year to finish work on the album.

The album's tone is decidedly more contemplative and mature than the bulk of Anthrax's previous work. Abandoning the humor and comic book references which were common on their previous albums, the lyrical focus of Persistence of Time is the need for tolerance and peace.[citation needed] Reaction to Persistence of Time was mixed, with critics and fans alternately panning and praising this darker sound. The band also introduced a progressive side of the music which had not been present in their earlier work, while also placing a reduced emphasis on typical thrash metal elements such as fast tempo and aggression.

This is the last full studio album to feature Joey Belladonna on vocals before John Bush took over vocal duties.. He appeared on several songs on the 1991 EP Attack of the Killer B's before splitting acrimoniously from the band in 1992. Belladonna returned to Anthrax in 2010 to record the album Worship Music released in 2011.

The introduction to the song "Intro to Reality" featured dialogue from an episode of The Twilight Zone called "Deaths-Head Revisited". "Keep It in the Family", "In My World", and "Belly of the Beast" were later re-recorded with the John Bush/Rob Caggiano lineup for the album The Greater of Two Evils.