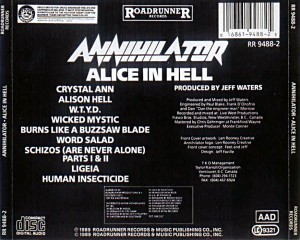 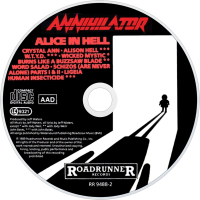 Alice in Hell is the debut album by the Canadian thrash metal band Annihilator, released April 17, 1989 on the Roadrunner label.
This album and its successor Never, Neverland are considered masterpieces of Canadian heavy metal.
Alice in Hell has received mostly positive reviews. Allmusic's Eduardo Rivadavia gave it three stars out of five, and states that "Annihilator's brand of technical, thinking man's thrash metal garnered many fans with this fine debut, arguably the best release of the band's career."