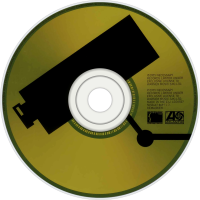 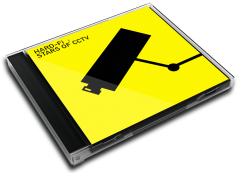 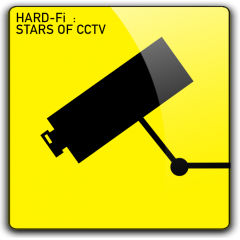 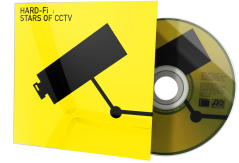 Stars of CCTV is the debut album by English indie rock band Hard-Fi. It was first released on 4 July 2005 on Necessary/Atlantic and Warner Music UK. It was nominated for the 2005 Mercury Music Prize, and reached #1 in the UK albums chart in January 2006, taking it about 5 months to reach #1 mainly due to the preceding single "Cash Machine" catching the sellers' attention; its original peak position was #6. It has reached sales of 1.2 million copies worldwide, with over 300,000 in the UK alone. The single "Gotta Reason" is included on the soundtrack of the football video game FIFA 06. The cover of Stars of CCTV does not bear the "Parental Advisory" sticker, despite the profanity used in the single "Living for the Weekend".

User Album Review
'Chav-rock' isn't a particularly glamorous way in which to describe the music of Hard-Fi, one of the many bands recently blessed with the NME's patented 'kiss of death', a positive appraisal. While writers at that publication do strictly love everything, they tend to, unfortunately for the chosen act, push some performers more vigorously than others. Hailing from Staines, a notorious working class area near (or technically, in) London, the 5-piece released their self-produced debut to mixed reaction earlier this year.

The band's location in close proximity to one of the world's most active music scenes meant they could be influenced by the London scene without necessarily being part of it. The cultural ambiguity had an important influence upon Hard-Fi as they prepared to produce a six-track mini-album to attract label interest. Due to a variety of factors, the mini-album was recorded primarily in a disused mini cab office the band managed to gain access to. Upon their signature to Atlantic Records, they promptly returned to this glam setting to recapture the apparent magic of their early recordings. It is to the band's credit that, unlike the Mike Skinner's of this world, their album sounds greater than the studio. The album, to anyone's ears, could have been recorded in a top of the range studio. Whether those ears would approve of the album as a whole is another matter, however.

On the face, Hard-Fi have a reasonable case for 'next Oasis' status. Firstly, they're the darlings of many sections of the British music press. Secondly, they?ve constructed a thuggish image for themselves, however inaccurate it may be. Thirdly, they both incorporate an element of dance into their fundamentally British sound. Fourthly, they have horrible dress sense. The question to be asked about their debut release, Stars Of CCTV, is whether it's a Definitely Maybe or whether it's a definite no-no.

The answer to that question, rather predictably, lies somewhere between the two semi-extremes. Definitely Maybe was, irregardless of personal taste, a landmark as far as British music is concerned. While that album may not have created Britpop, it surely became the sound for which the movement is best remembered. Hard-Fi, try as they might, achieve nothing of the sort. Stars Of CCTV is an innovative album in its own way, but genre-defining it is not. The album owes a lot to what has gone before: Britpop; dance-rock crossover acts (Happy Mondays, Stone Roses) and the burgeoning indie rock scene inhabited by soundalikes Kasabian and those-under-pressure-to-perform, Franz Ferdinand and the Killers.

Opening track Cash Machine is perhaps the strongest track with which the band could have begun the album, and is definitely the most fitting track for the position. A strong, heavy rhythm and a funky bassline play a classic soul trick, concealing a dark, despairing lyric within an almost euphoric musical atmosphere. The chorus is the type festival organisers dream of, utilising to its fullest effect frontman Richard Archer's monotonous but character-laden voice.

This strong opening fades out only momentarily before the second track explodes to life with another strong bassline and drumbeat. Any critic of modern mainstream rock will be fully aware of how unusual it is to find an album which features bass for two songs straight let alone uses the bass as a central part of the song's structure. Not surprisngly, Middle Eastern Holiday was a moderately-successful single. On the surface, it's the kind of song the media has been lapping up since Franz Ferdinand broke into the mainstream, but below lies a strongly written and very well-produced song which most of their contemporaries could only dream of releasing.

Another single, and perhaps the album's most complete recording, follows in Tied Up Too Tight. Featuring strong group vocals and Archer's best performance on the album, aswell as some excellent work by guitarist Ross Philips and complemetary piano, the track is only brought down by some truly awful lyrics, which is perhaps not surprising given their stint as Green Day's warm-up act in the US.

Straight out of West London/Just like a loaded gun.

Unfortunately, it's at the point where the singles dry up that the album starts to fade. Gotta Reason is a decent track, led by a simple, catchy, guitar line but ultimately a drab vocal dissolves any early promise. Hard To Beat was released as a single, and it's possible to see why, but it bears stark contrast to lasting appeal of the aforementioned tracks. Unnecessary Trouble possesses a strong hook but little else. For once, the band is persuaded to leave space in the mix, and it comes across as awkward.

Better Do Better gives each member room to indulge somewhat, and as such is of some lasting interest. The arrangement is grand, the individual performances are splendid, and the songwriting is again quite strong. Archer even allows himself an extended range of' well, more than one note. Move On Now is the obligatory piano ballad, somewhat reminiscent of Jet's 'Look What You've Done', featuring a curiously endearing off-key vocal and little else as regards the arrangement. The song at 5:07 is, frankly, far too long but nonetheless endurable. The track is at least indicative of something deeper and more ambitious within the band, though it's been manifested here as something quite a way short of unique.

Feltham Is Singing Out features a 'Kashmir'-esque string section but, unfortunately, not a memorable tune to accompany it. Much better is the most recent single, Living For The Weekend, which helps close the album on a more encouraging note. It still fails to live up to the first trio of singles, but it improves on the unimpressive mass which props up the albums interior. Final track, Stars Of CCTV, from which the album's title is taken, continues the theme of the preceding track in order to finish the album on a buoyant note. The lighthearted strum-along sees singer Archer speak proudly of being 'stars of CCTV', Close Circuit Television, 'hidden camera' for the dummies. Lads go out on the weekend, take substances, get caught on camera etc. etc. It's a fitting finish to album as the band show throughout the album a refreshing willingness not to take themselves too seriously.

Stars Of CCTV won?t change the world, or the indie-rock movement, but it's 45 minutes of solid rock music which will certainly defy the expectations of the average listener, as it did mine. Thieves, as has been proved countless times down the years, can rock with the best of them. This isn't Leadbelly, nor is it Jailhouse Rock, but it's a solid, if ultimately disappointing, venture into the world of greater London's underclass.