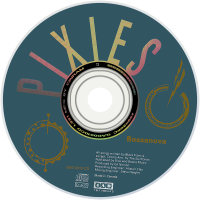 Bossanova is the third album by the American alternative rock band Pixies, released in August 1990 on the English independent record label 4AD in the United Kingdom and by Elektra Records in the United States. All of Bossanova's original material was written by the band's frontman Black Francis; it marked the point where his artistic control over the band became absolute. The album's sound, inspired by surf and space rock, complements its lyrical focus on outer space, which references subjects such as aliens and unidentified flying objects.

Because of 4AD's independent status, major label Elektra Records handled distribution in the United States; Bossanova reached number 70 on the Billboard 200. The album peaked at number three in the UK Albums Chart. Two singles were released from Bossanova, "Velouria" and "Dig for Fire"; both charted, at #4 and #11 respectively on the US Modern Rock Tracks chart.

After Pixies finished touring obligations for their second album Doolittle (1989) in 1990, band members Black Francis, Joey Santiago, and David Lovering moved from Boston to Los Angeles. Bassist Kim Deal did not initially move with the rest of her band mates due to tension within the band. Deal ultimately decided to travel out to Los Angeles with the rest of the group.Lovering stated that he, Santiago, and Black Francis moved to Los Angeles because that's where they intended to record. The three band members lived in the Oakwood apartments, along with comic Garrett Morris and members of the band White Lion. Producer Gil Norton also moved into the apartment complex.Pixies started recording material for Bossanova at Cherokee Studios, where the sessions ran into problems. Norton said that nothing could be recorded after six P.M. because the recording desk would pick up pirate radio stations. Norton decided to work at overdubs somewhere else for a few days until the problem was corrected, but when he returned to Cherokee, he found that any time something was plugged into a guitar amplifier it would generate "this incredible hum". Norton refused to tell 4AD owner Ivo Watts-Russell about the problem until he felt he could address the problems. One day while visiting a bar, Norton and Santiago met producer Rick Rubin, whom they informed of their situation. Rubin had his secretary find another studio for the group, and the band continued recording at Master Control.

In contrast to previous records, many songs were written in the studio and few demo recordings were created. Santiago said that the band only practiced for a two-week period, in contrast to previous practice in Boston where the group rehearsed constantly.Black Francis noted, "So I was writing [lyrics] on napkins five minutes before I sang. Sometimes it's good, sometimes not. That's just the nature of that songwriting."