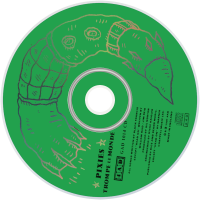 Trompe le Monde is the fourth (and latest before the split) album by the American alternative rock band Pixies, released in 1991 on the English independent record label 4AD in the United Kingdom and by Elektra Records in the United States. After the surf-pop of Bossanova, the album saw a return to the abrasive sound of the band's early albums.
The album name comes from the title of the first track, "Trompe le Monde", a French phrase meaning "Fool the World". Unlike previous albums, the title of the album comes from the name of a song (rather than a song lyric), and is a play on the French phrase "trompe l'oeil"—a painting technique in which the painter fools the viewer into thinking objects presented are real.
"Head On" is a cover of the Jesus and Mary Chain track that was released as a single reaching number 6 in the Billboard Modern Rock Tracks Chart.
"U-Mass" is a song about the University of Massachusetts Amherst, where Black Francis met Joey Santiago before dropping out to form Pixies. Santiago recalls that the original guitar riff was written while they were still enrolled.