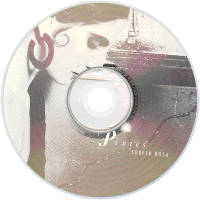 Surfer Rosa is the first full-length album by the American alternative rock band Pixies, released in March 1988 on the British independent record label 4AD. The album's unusual and offbeat subject matter includes references to mutilation and voyeurism; this is augmented by experimental recording, low-fidelity production and a distinctive drum sound. Surfer Rosa contains many of the elements present in Pixies' earlier output, including Spanish lyrics and references to Puerto Rico.
Because of 4AD's independent status, distribution in the United States was handled by British label Rough Trade Records; however, it failed to chart in either the UK or the U.S. "Gigantic" was the only single taken from the release (in a re-recorded version), and only reached number 93 on the UK Singles Chart. Despite this, Surfer Rosa was re-released in the U.S. by Elektra Records in 1992, and in 2005 was certified gold by the Recording Industry Association of America.
Surfer Rosa is often cited as a favorite of music critics and is frequently included on professional lists of the all-time best rock albums. Many alternative rock artists, including Billy Corgan and PJ Harvey, have cited the album as inspirational; Nirvana's Kurt Cobain frequently acknowledged that Surfer Rosa was a strong influence on Nevermind, and, in 1993, Cobain hired the album's producer Steve Albini to produce his band's album In Utero.

Album Review
Though the specialist subjects of sun, surf and dubious sexual encounters of their debut ep (1987’s Come On Pilgrim) had been retained, the overall mood masterminded a year later on their first full length record was altogether more unruly.
The Bostonian quartet, formed by guitarist and singer, Charles Michael Kitteridge Thompson IV - who for understandable reasons of alt rock credibility rechristened himself Black Francis – fell in with producer Steve Albini to create an album which though failing to chart at the time, had a telling influence on those picking up on the harsh, surly undertow of its (at times) frat-house humours.
Albini’s production simultaneously amplifies The Pixies’ endearing naiveté and hectic energies, contrasting the polarities of throwaway trash (the tongue-in-cheek nerdy B-52s-type hero worship of “Tony’s Theme”) versus the snarling thrash of “Vamos” (a remade carry-over from Come On Pilgrim) which does much to lend the album its unsettling volatility.
Although “Gigantic” co-written and sung by bassist Kim Deal, shows they were more than capable of delivering hook-laden pop, it credibly opened up the kind of territory which Kurt Cobain and pals would later claim as their own.
Indeed such was its legacy, David Bowie covered “Cactus” on 2002’s Heathen. Somewhat sanitised on that occasion, the original version here has a don’t-go-there edge to it, and is one of the best songs ever to burst in and shine an FBI-style flashlight onto the darker, closeted recesses of obsessive love; ‘Bloody your hands on a cactus tree/ Wipe it on your dress and send it to me.’
The left-field locations continue with “Bone Machine,” the limelight veering between Francis’ tale of parking lot molestation and a wonderful solo by their ingenious lead guitarist, Joey Santiago. Beginning like James Brown’s “Sex Machine” being not so much taken as frog-marched to the bridge, it rapidly leaps into a revved-up blast recalling one of King Crimson’s Robert Fripp’s patented chordal solos; a genuinely thrilling 18 seconds that you never want to end. Though the follow-up, Doolittle (1989), ultimately widened their appeal, this is indispensable warts-and-all stuff that set the benchmark.