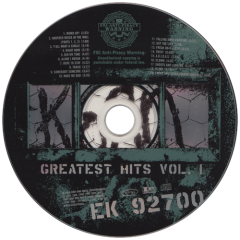 Greatest Hits, Vol. 1 is a greatest hits compilation released in October 2004 by American rock band Korn. The album features select tracks from their first six studio albums presented in reverse chronological order. There are two previously unreleased songs on the compilation: a cover of Cameo's "Word Up!", and a compilation of all three parts of Pink Floyd's "Another Brick in the Wall" and "Goodbye Cruel World". These were the final songs recorded with former guitarist Brian Welch, who left the band shortly after the album's release.
Greatest Hits, Vol. 1 debuted and peaked at number four on the Billboard 200, achieving a Platinum certification by the RIAA. For unspecified reasons Korn left off two of their hits, "Thoughtless" and "Good God" but included songs "Trash" and "Twist" on the album, though neither were released as singles.