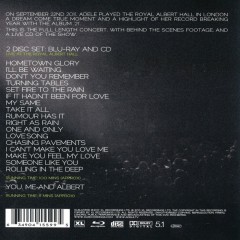 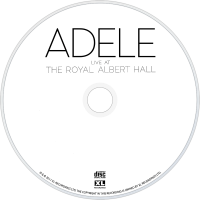 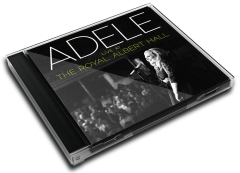 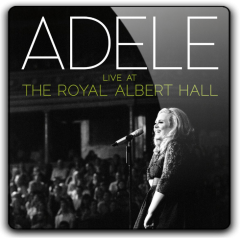 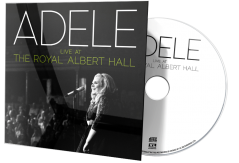 User Album Review
Shortly after Adele performed at “Royal Albert fucking Hall,” the songstress was sidelined with on-going throat problems, yet her packaged CD/DVD shows few signs of the vocal troubles she’s been up against this year. Backed by a live band, including a string section and backup singers, Adele brings the dramatics of her two albums to life, with a bit of humorous, cuss-filled banter in between songs. Fans are given another reason to root for her while she recuperates, as her voice stands out in a sea of Autotuned “divas”.

Opening song “Hometown Glory” immediately sets the tone, as she proves that her talent requires little else but a piano, and Adele’s soul-powered voice is enough to fill the Royal Albert Hall five times over. “Chasing Pavements” is a highlight from her debut, while the Bob Dylan-penned “Make You Feel My Love” serves here as a tribute to Amy Winehouse. Adele asks those in attendance to light up their cell phones in memory to the late singer. As a disco ball swirls across the starry ocean-sized audience, it’s a truly touching moment, especially as Adele herself has acknowledged the influence Winehouse has had on her career.
She covers The Steeldrivers (“If It Hadn’t Been for Love”) and Bonnie Raitt (“I Can’t Make You Love Me”) and both come across as heartfelt and stunning, yet it’s her own songs and self-deprecating, humorous storytelling found on the full concert DVD which find her truly connecting with the audience. Before launching into a “rare, happy song” entitled “I’ll Be Waiting”, Adele charmingly lets everyone know, “I’m pretty miserable, really.”

The bulk of the setlist centers around her record-breaking album, 21, which includes many of the real gems she’s got in her catalog thus far. She prefaces “Take It All” by saying, “It’s got some high notes, so bear with me. I’ve had a respiratory infection.” It’s a bit of a shaky performance, especially since it draws the listener back to her health issues, whether directly vocally related or not. “Rumour Has It”, a tongue-in-cheek, “takin’ the piss” kind of song aimed at her rumor-believing friends, brings the tempo up a notch, although it’s hard to deny that the hook of the song, performed late in the set, finds her voice sounding a bit strained.

The incredibly moving “Someone Like You” should have been the final number – while she listened to the audience sing back the chorus of the emotionally charged song, Adele was left in tears, revealing her genuine sincerity and gratefulness. Instead, “Rolling in the Deep” is played last, and is admittedly nasally, although the crowd’s hand claps and singing help to energize it into a fitting finale. Nonetheless, both of her last songs, which served as her encore, are moving moments and a definitive celebration of how far she’s already come.

The 90-minute DVD is beautifully shot, if a bit too quick with the cutaways, and includes all of the between-song banter, giving people a chance to see her cracking quips about her ex-boyfriends, cackling like the best of them, and throwing up the middle finger. It further enhances the comfortable setting of a “cup of tea and a take-away” vibe she wishes to portray to her fans, so as to maintain intimacy no matter the size of the venue. Also included is an eight-minute, black and white, behind-the-scenes look at her, sans makeup and in hair curlers, on the day of the show. It’s interjected with short fan interviews as they wait in line for what will be Adele’s already classic performance.

Although her witty remarks and expletive-filled jokes might cause some of her mom fan base displeasure, it also makes her the most real singer out there, while emphasizing her purpose: she might have suffered some wounds in love, but has a spunky attitude to fall back on when she falls out of love. Unlike Beyoncé, she’s not pining for the all-around sweetheart title, and thankfully, is as far from the awful Katy Perry methods of whipped cream-shooting boobs as it gets. Then again, it just shows that she’s in a class of her own.

In regards to today’s female singers, some might say she fills a niche, but lucky for her, it’s a wide-ranging field in which she doesn’t have to pander to just one type of fan. Her music appeals to those who like a good pop song, those who feel rhythm and blues in their blood, and those who just happen to like to sip on their lattés with a bit of heartbreak tearing away at their insides. Another live Adele concert might not come about until 2013, but Live at the Royal Albert Hall should help her find new fans and keep the devoted ones wishing for her speedy recovery.

Essential Tracks: “Hometown Glory”, ”Turning Tables”, “Someone Like You”