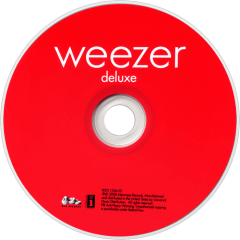 Weezer, also known as "The Red Album", is the sixth studio album by the American alternative rock band Weezer, released on June 3, 2008. Rick Rubin and Jacknife Lee both produced parts of the album, with the band producing a handful of tracks themselves. Like the group's 1994 debut album Weezer (and unlike most Weezer records that featured Rivers Cuomo as the main songwriter and vocalist), other band members contributed to songwriting. This is the first and so far, only, Weezer album to feature lead vocals from all band members.
The video for the album's first single "Pork and Beans" quickly became the most-watched video on the internet the weekend following its release. Additionally, an unconventional Hootenanny Tour replaced the traditional rock concert tour to promote the album. The sales of Weezer are below that of its 2005 predecessor, Make Believe, which was certified Gold (500,000 copies) after the same amount of time Weezer took to sell 300,000 copies.