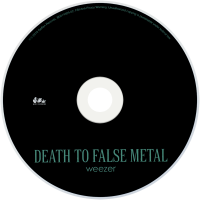 Death to False Metal is the ninth studio album by alternative rock band Weezer, released on November 2, 2010 by Geffen Records. The album comprises several previously unreleased tracks from throughout Weezer's career, with vocalist and guitarist Rivers Cuomo stating "Together, are the album that should logically follow Hurley".
The album was released simultaneously with the deluxe edition of the band's second studio album, Pinkerton. The title is a reference to Manowar's common phrase often used in their song lyrics (such as "Master of the Wind") and album sleeves. Unlike their previous albums, the album was not promoted with a single.