Welcome to the Pleasuredome 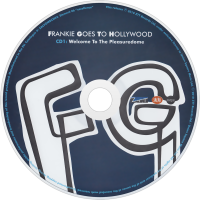 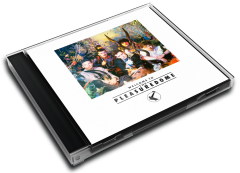 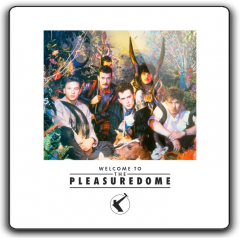 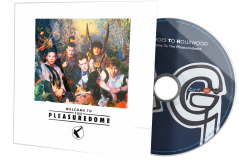 Welcome to the Pleasuredome was the debut album by Frankie Goes to Hollywood, first released in the UK in October 1984 by ZTT/Island Records. Originally issued as a vinyl double album, it was assured of a UK chart entry at number one due to reported advance sales of over one million. The album was also a top ten seller internationally in countries such as Switzerland, Sweden, and New Zealand.
Whilst commercially successful, the album also drew criticism for containing new versions of the group's (already much-remixed) hit singles from the same year ("Relax" and "Two Tribes", plus B-side "War"), as well as a surfeit of cover versions in lieu of much new original material.
However, the album's evergreen ballad "The Power of Love" would subsequently provide the group with their third consecutive UK number one single.

Album Review
Although no-one realised it, Frankie Goes to Hollywood was possibly the only band that espoused the punk ethic at the shiny epicentre of the 80s. Their success was a triumph of the DIY guerrilla marketing ethic, arguably the last group to make it before the corporate departments came to rule the day. It wasn’t just about money; it was about smartness, talent and having a bloody good laugh.

Originally released in October 1984, Welcome to the Pleasuredome remains Frankie’s high-water mark. Producer Trevor Horn brought all the excess of new technology to the project. He made simple songs – Relax, Two Tribes, The Power of Love – sound overblown and exciting, while publicist Paul Morley eulogised the group with his flowery phrases: a parody and update of the starched-shirt beat-speak on the reverse of early Beatles and Cliff albums.

But none of it could have been done without the full-on personality of the group themselves, which united the scally side of Liverpool with the city’s arty, eyeliner wing – there was an aesthete, a cuddly dancer and ‘the lads’. The group’s humour, ideas and sexual deviance gave Horn and Morley more than enough raw materials to play with.

Horn may never have produced something better than this album’s title track. It was stupid, audacious, and hilarious. It was the best progressive rock record of the 80s. It may have been buried in bright shiny veneers and modernism, but it was a Yes track, really – underlined by the fact that Steve Howe from the group played acoustic guitar on it. Over-heard at the time, but now not heard enough, it was the prog Trojan horse within the chart’s castle walls and the best track here by an enormous distance.

This is a beautifully-packaged version of the album, gathering almost the whole story together with rarities such as Disneyland, the unreleased Watusi Love Juicy and the 17 minutes of Relax’s Greatest Bits (previously only available on ‘cassingle’, fact fans).

It was over really for Frankie Goes to Hollywood the moment Welcome to the Pleasuredome came out. The hype couldn’t be maintained and although there was a sell-out tour and further chart hits ahead, it was never the same. But for now, marvel once more at their splendid, excessive audacity.