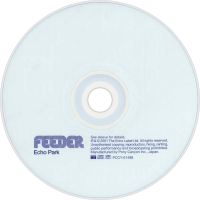 Echo Park is the third studio album by the Welsh rock band Feeder. It was their first album since 1999's Yesterday Went Too Soon. The album was recorded at Great Lindford Manor in Milton Keynes during most of 2000, and was produced by Gil Norton.
Following a return to live performances of their own, after performing for most of the year at various festivals and the release of the singles "Buck Rogers" and "Seven Days in the Sun" the album was released on 23 April 2001. Two further singles—"Turn" and "Just a Day"—followed the album's release, in which the latter was not on the album, but as a b-side on "Seven Days in the Sun". The album received mixed reviews from the music press but was received well by the public, reaching number five on the UK Albums Chart.