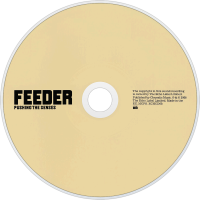 Pushing the Senses is the fifth album by the British rock band Feeder. It was released on Echo, Liberation Music and PIAS on 31 January 2005 in the United Kingdom, Australia, New Zealand and Europe, while being released on Pony Canyon in Japan on 10 February 2005. Despite mixed reviews, the album was a commercial success, in which it was a top five album in Feeder's native United Kingdom, and its lead single "Tumble and Fall" was a top five single. This made the album Feeder's most successful in terms of peak chart position, but did not experience the same chart longetivity as presuccessor Comfort in Sound, which spent 36 weeks on the UK top 75 chart in comparison to the 15 weeks spent by Pushing the Senses.
The album represented a similar musical style as seen on 2002's Comfort in Sound, and featured more songs written on a piano and also had, as described by frontman Grant Nicholas, more of an "organic" sound than that of the latter. Inspirations were that of John Lennon within some of the songwriting.
Most critics criticised the bands approach to what was described as Keane and Coldplay style music, and "departing" from their trademark sound heard on their first three albums, while Q magazine stated that the album could "finally establish Feeder as major league players".