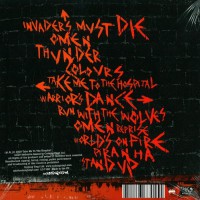 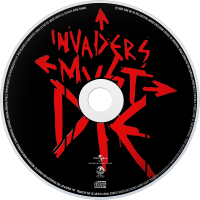 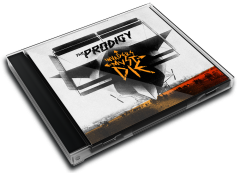 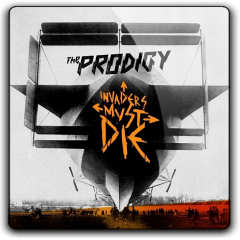 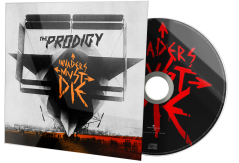 On 5 November 2008, it was announced that the band's fifth studio album would be called Invaders Must Die and would be released on the band's new label, Take Me to the Hospital. It was released in the US on 3 March 2009, and was the first Prodigy album since 1997's The Fat of the Land to feature all three members of the band.
The album featured drummer Dave Grohl on drums for "Run with the Wolves". The top five hit "Omen" and "Invaders Must Die" were co-produced with Does It Offend You, Yeah? frontman James Rushent. The band said that the album would go back to their "old-school but cutting edge" roots. The album was released as a CD, CD-DVD set, double vinyl, digital download, and a luxury 7-inch vinyl box set including five 7-inches, CD-DVD, bonus CD, poster, stickers, and stencils.
Invaders Must Die was released on 21 February 2009 in Australia and in Europe on 23 February 2009, charting at number one in the UK with week one sales of over 97,000 a higher figure than for either Always Outnumbered or their singles collection. The album also reached the top five in Germany and Australia and top 10 in Norway and several other European countries.

User Album Review
Five years on from their last album, Keith Flint and Maxim Reality have joined Howlett in the studio to make what many will consider a last attempt at proving their relevance. Invaders Must Die then is the musical equivalent of a day spent on a bouncy castle: old-fashioned and loud, but damned good fun.
During the 1990s The Prodigy sat slightly above Underworld and The Chemical Brothers as rulers of British dance music.Yet by 2004's Always Outnumbered, Never Outgunned the Braintree, Essex mob had lost their way. That unremarkable album was made solely by leader Liam Howlett and largely met by indifference.
It would have been pointless trying to channel all the disparate progression electronic music has made in the last five years, so our trio have barely bothered.
What they have done is created a stonking batch of bangers that'll get fans and new converts leaping around as they listen.
The blatant, stirring calls for rebellion and anti-authority rants are still here. Check Piranha's ''They pull you under if they take a hold'', or Omen's ''The writing's on the wall/it won't go away''. Have they tried a board rubber?
Old-rave trademarks are here in spades, too. Warriors Dance, which sweeps in on a seductive snake chamer's riff, has a sped-up female vocal so old-skool it's like being pummelled in the face with a glowstick, while World's On Fire is so early 90s it wears a shellsuit.
Another highlight is Run With The Wolves: a track built around a Dave Grohl drum part. It epitomises torn metal and bright orange sparks and sounds like the soundtrack to a particularly vicious bare-knuckle robot boxing match.
Fans of Australian drum 'n' bass crew, Pendulum, will recognise familiar beats and motifs, but that's because their beloved antipodeans stole them from the Prodge in the first place.
If you want to hear where clubbing is heading, the likes of Diplo and Kid Cudi are worth checking. But for a satisfying lesson in bringing the noise taught by grandmasters, return to these twisted firestarters.