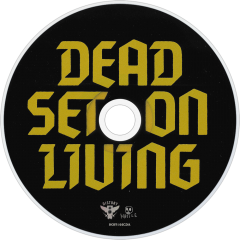 Dead Set on Living is the fourth studio album by the Canadian hardcore punk band Cancer Bats. It was released on April 16, 2012 through Hassle Records in Europe, April 17 through Distort Entertainment in Canada, April 20 through Shock Records in Australia and New Zealand, and April 23 through Metal Blade Records in the United States. The album was recorded in December 2011.

Album Review
The more great songs a band writes, the higher expectations rise around the time of each new release. Toronto natives Cancer Bats leapt above the radar in 2008 with their sophomore album, Hail Destroyer. An album that spat fire and bile, it rightly made them critical darlings in the rock press and acquired them a devoted fanbase. Their star rose higher a couple of years later with a radio-friendly cover of the Beastie Boys’ hardcore anthem Sabotage, a song brightly at odds with the less-accessible album it signed off, Bears, Mayors, Scraps & Bones.
Now, Dead Set on Living has arrived amidst proclamations from the band that 2012 will be the "year of the riff" and they’ll happily be the ones to supply them. From the staggered, seismic churn of opening track R.A.T.S., guitarist Scott Middleton provides the album’s pulse as much as he leads the way. The Pantera influence is still here, while their recent Black Sabbath tribute set ”“ performed under the name Bat Sabbath ”“ is perhaps responsible for slowing things down to result in several songs that are as heavy and dirty as the bathtub in Saw V.
All of which makes their new tracks familiar but different. Often, though, they lack the sheer impact of their previous triumphs. Frontman Liam Cormier sounded like he could start a riot on Hail Destroyer’s title-track and opened his heart with a meat cleaver on the same album’s Regret. Here, frequently, he sounds ground down and overwhelmed by his anger, anxiety and frustration, rather than roaring above life’s setbacks with a searing turn of phrase. Promising his enemies a place in hell and that there’s safety in numbers doesn’t edify the same way as him in full flight, which we get only now and again. This is most memorable when he paints a vivid picture of a halo slipping down around his neck and burning the defiance out of his throat on Bricks & Mortar.
Dead Set on Living is an album that provides a bumpy ride for anyone who hunkers down for its duration. Cancer Bats haven’t lost their swagger or even their appeal, but this is uneasy listening in every sense.