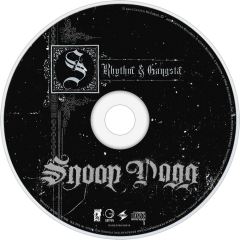 Album Review
Snoop Dogg's reinvention is probably one of the more startling of modern times. Bursting onto the scene ten years ago, he was the self-styled OG; the baddest hound in the pound, with a killers drawl and a real life murder rap. 'Kick this evil bastard out' screamed the tabloids when he visited the UK.
Ten years on and Snoop is an MTV parody pimp - your loveable fur-coated friend, who, though he might misbehave occasionally, is more likely to sidle up, rest his nose on your lap and shizzle your nizzle. In other words, he's more Droopy than the Hound of the Baskervilles.
Even his trademark misogyny has been toned down. 'Just leave her, don't hit her', he counsels here, on what he introduces as 'another nine-inch dick classic', "I'm Threw Witchu". OK, it's hardly Andrea Dworkin, but it's a start.
And, with the preposterously titled R&G (Rhythm & Gangsta): The Masterpiece, he's probably produced the essential Snoop Dogg album. Built on the best beats money can buy, smooth-as-silk G-funk and that low-slung Dogg delivery it could easily be subtitled 'The Best Lapdancing Soundtrack Album In The World...Ever.'
Much of the acclaim can be laid at The Neptunes' door. Pharrell Williams and Chad Hugo co-produce five tracks here, including the awesome "Drop It Like It's Hot". Combining the sleek minimalism of Jeru The Damaja's "Come Clean" with a futuristic "Buffalo Girls", it's one of the singles of 2004.
Elsewhere, Justin Timberlake pops up for what sounds like a Justified outtake on "Signs", joining a roll call of big hitters that includes 50 Cent, Nelly, Lil Jon, Bootsy Collins, and The Gap Band's Charlie Wilson.
But it's Snoop who dominates. His sleazy demeanour might lack the cold-eyed instinct of old, but he remains one of hip-hops most distinctive voices. And even if he outstays his welcome here by at least half an hour, R&G is, if not a masterpiece, then certainly entertaining and occasionally mind-blowing.
Top Dogg, still.