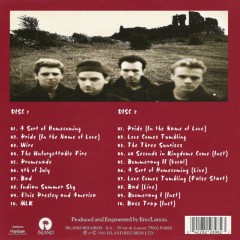 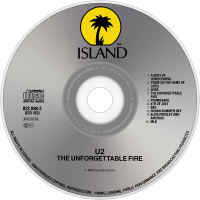 The Unforgettable Fire is the fourth studio album by Irish rock band U2. It was released in October 1984. The band wanted a different musical direction following the harder-hitting rock of their 1983 album War. They employed Brian Eno and Daniel Lanois to produce and assist them experiment with a more ambient and abstract sound. The resulting change in direction was at the time the band's most dramatic.
Recording began in May 1984 at Slane Castle, where the band lived, wrote, and recorded to find new inspiration. The album was completed in August 1984 at Windmill Lane Studios. It features atmospheric sounds and lyrics that lead vocalist Bono describes as "sketches". Two songs feature lyrical tributes to Martin Luther King Jr. The Unforgettable Fire received generally favourable reviews from critics and produced the band's biggest hit at the time, "Pride (In the Name of Love)", as well as the live favourite "Bad", a song about heroin addiction. A 25th Anniversary edition of the album was released in October 2009.
The title is a reference to "The Unforgettable Fire"-an art exhibit about the atomic bombing of Hiroshima. The band saw the exhibit in November 1983 in Japan while on the War Tour.
U2 feared that following the overt rock of their 1983 War album and War Tour, they were in danger of becoming another "shrill", "sloganeering arena-rock band". The success of the 1983 Under a Blood Red Sky live album and the Live at Red Rocks video, however, had given them artistic-and for the first time-financial room to move. Following a show at Dublin's Phoenix Park Racecourse in August 1983, one of the final dates of the War Tour, lead vocalist Bono spoke in metaphors about the band breaking up and reforming with a different direction. In the 10th issue of U2 magazine, issued in February 1984, Bono hinted at radical changes on the next album saying that he couldn't "sleep at night with the thought of it all" and that they were "undertaking a real departure". As bassist Adam Clayton recalls, "We were looking for something that was a bit more serious, more arty."
The band had recorded their first three albums with producer Steve Lillywhite, and rather than create the "son of War", they sought experimentation. Both Lillywhite and the band agreed that it was time for a change of producers and not to "repeat the same formula". The band had considered using Jimmy Iovine to produce a new record. However, they found their early musical ideas for the album to be too "European" for an American producer. They also considered approaching Conny Plank, whose previous credits included Can and Kraftwerk, and Roxy Music producer Rhett Davies.
Guitarist The Edge had a long appreciation of musician Brian Eno's work, and admired his ambient and "weird works". The band were also fond of his work with Talking Heads. Having never worked with music such as U2's, Eno was also initially reluctant. When the band played him Under a Blood Red Sky, his eyes "glazed over" at its overt rockness[clarification needed]. Eno had brought along his engineer Daniel Lanois to his meeting with U2 intending to recommend Lanois work with the band instead. Eno's earlier doubts were resolved by Bono's power of persuasion and his increasing perception of what he called "U2's lyrical soul in abundance", traits which had become less evident on the War album. Eno commented that the band were "constantly struggling against it as if as if they were frightened of being overpowered by some softness". Eno was impressed by how they spoke, which was not in terms of music or playing, but in terms of their contributions to the "identity of the band as a whole". Eno and Lanois eventually agreed to produce the record. Eno explained that he focussed on the ideas and conceptual aspects, while Lanois handled the production aspects. In Bill Graham's words, Eno's task was to "help them mature a new, more experimental and European musical vocabulary". Island Records boss Chris Blackwell initially tried to talk them out of hiring Eno, believing that just when the band were about to achieve the highest levels of success, Eno would "bury them under a layer of avant-garde nonsense". Nick Stewart, also of Island Records, said that at the time he thought they were "mad", but that the group's decision to stretch themselves and find an extra dimension became the "turning point in their career".

User Album Review
The Unforgettable Fire was the right record at the right time. U2 had ended their first phase of flag-waving sincerity with the live mini-album Under A Blood Red Sky and its accompanying long-form video, Live At Red Rocks. Their preceding album, War, was a self-assured update of their early melodic template of spiky rock and searing anthems.
Instead of repeating their formula they enlisted the production skills of ex- Roxy Music polymath Brian Eno and young Canadian Daniel Lanois. Island boss Chris Blackwell tried to dissuade the group from using the duo, but they pressed ahead. Enrolling Eno brought the band a credibility they may never have gained; in turn, they gave Eno his largest audience ever.
The nagging insistency of opener, A Sort Of Homecoming, signals this new direction ”“ all slightly out-of-focus, sketchy, yet strangely beguiling. However, instead of the producers trying wholesale to meddle with the existing formulas, both parties enhanced each other's work, which added a looseness and ambiance to the groove. This is none more evident than on the title track, which has a sleek suppleness to it, as previously unheard on their work, while still unmistakably being U2. However, they knew not to alienate too much ”“ the album's first single, Pride (In The Name Of Love), is still arguably U2's greatest stadium sing-along.
It was ostensibly promoting this album that U2 played their most important gig ever, Live Aid, showcasing the resolutely uncommercial Bad ”“ a song about heroin addiction that Bono has described as being Van Morrison crossed with German electronica ”“ the band became, alongside Queen, the talking point of the day.
U2 would never be the same again. Although often overshadowed by its successor, The Joshua Tree, The Unforgettable Fire is a record of great, moving beauty.