02) I Still Haven't Found What I'm Looking For 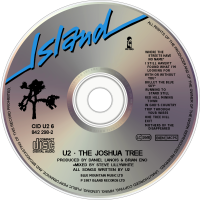 Album Review
It's hard to imagine these days, but at one time the world didn’t belong to Paul 'Bono' Hewson and his pals. By 1987 the band had undoubtedly become stadium”“fillers in Europe, but it was America that was their heartland, and they were on the verge of cracking it wide open.
Having already establishing their cavernous sound with producer Steve Lillywhite, by 1984 The Unforgettable Fire had the band opting for the more ambient (and subtle) team of Brian Eno and Daniel Lanois. It was a canny move that both allowed them more space to emote in the studio and also perfectly suited the student population in the States, reared on FM radio.
In time-honoured fashion the band toured the US like madmen, and by 1987 the bands' American citizenship-by-osmosis had magically occurred. The Joshua Tree's songs augmented their political stance with bigger subjects such as right-wing intervention in El Salvador (''Bullet The Blue Sky'') and the Mothers Of The Plaza De Mayo in Argentina (''Mothers Of The Disappeared'') In other words, even if the world didn’t yet know it, U2 were now a global brand.
But it wasn’t mere posturing. The Joshua Tree, with its black and white Anton Corbijn sleeve set in Death Valley was a truly widescreen experience. The Edge's arpeggios (here used to great effect on the opener, Adam Clayton's rattling traps and Larry Mullen's rumbling, single note runs were alchemically transformed by Eno and Lanois into pure Americana, complete with wailing harmonicas ("Trip Through Your Wires") and endless references to deserts and water.
With the first three tracks all conquering the singles charts on both sides of the Atlantic, U2 were now here to stay. Unfortunately it also signalled a point where they began to take themselves a little too seriously (as evinced by their ponderous Rattle And Hum film). But The Joshua Tree ”“ voted number 26 in Rolling Stone's top 500 albums of all time - 20 years on, it remains their finest moment to this day.