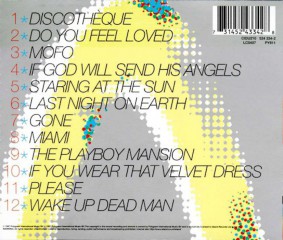 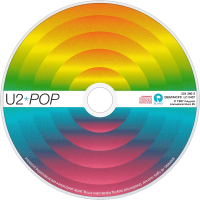 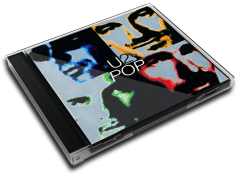 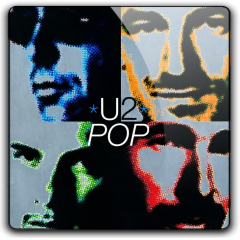 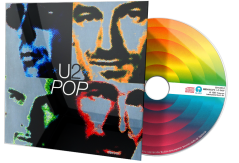 Pop is the ninth studio album by Irish rock band U2, released in March 1997. The album was a continuation of the band's 1990s reinvention, as they pursued a new musical direction by combining alternative rock, techno, dance, and electronica influences. The album employs a variety of production techniques relatively new to U2, including sampling, loops, programmed drum machines, and sequencing.
Recording sessions began in 1995 with various record producers, including Nellee Hooper, Flood, Howie B, and Steve Osborne, who were introducing the band to various electronica influences. At the time, drummer Larry Mullen, Jr. was inactive due to a back injury, prompting the other band members to take different approaches to songwriting. Upon Mullen's return, the band began re-working much of their material but ultimately struggled to complete songs. After the band allowed manager Paul McGuinness to book their upcoming 1997 PopMart Tour before the album was completed, U2 were rushed into completing the album. Even after delaying the album's release date from the 1996 Christmas and holiday season to March 1997, U2 ran out of time in the studio and the final product was not to their liking. Since the album's release, many of its songs have been re-recorded and remixed.
Although it reached #1 in 35 countries, including the United Kingdom and the United States, Pop's lifetime sales are among the lowest in U2's catalogue, and critical reaction was mixed. Pop was certified Platinum by the RIAA on 5 May 1997.

User Album Review
The Edge described Pop, rather disingenuously, as being, ''about as far away from U2 as it is possible to be". This was strange considering that their last album, in collaboration with Brian Eno, had been the very un-U2 Passengers album. This was the point where, despite their epic status as world superstars, U2 were finally proven to have feet of clay.
It's the sound of a band not reinventing themselves (as they did on Achtung Baby), but straining to keep up with the zeitgeist. In 1997 Britpop was on the wane, and dance music was now mainstream. The band employ Howie B, Steve Osborne and Flood to pep up some quite straightforward songs with loops, samples and bubbling synths. But despite the fairy dust they still have a somewhat dour heart.
Opening single Discotheque may have had a jolly camp glitterball romp of a video, but the irony seemed forced. By Last Night On Earth and Gone the party mood's soured and the other blast of fresh air: Mofo, has been forgotten. Closer, Wake Up Dead Man, may be the grimmest thing they ever committed to tape.
The number of singles released from Pop (six out of 12) just drove home the point that maybe U2 had strayed too far. Barely any of this material was used in subsequent gigs, and on their next studio outing they returned to what, after all, they knew best: pure stadium rock.