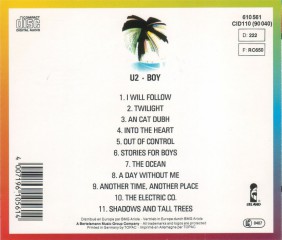 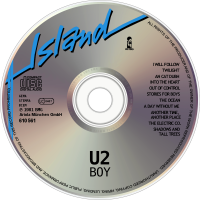 Boy is the debut album from Irish rock band U2, released October 20, 1980. Produced by Steve Lillywhite, the album received generally positive reviews. Common themes among the album's songs are the thoughts and frustrations of adolescence. The album included the band's first United Kingdom hit single, "I Will Follow". Boy's release was followed by U2's first tour of continental Europe and the United States.

Originally, Joy Division producer Martin Hannett (who also produced U2's "11 O'Clock Tick Tock" single) was supposed to produce U2's debut album, but was too distraught after the suicide of Ian Curtis. Boy was recorded at Windmill Lane Studios in Dublin with Steve Lillywhite producing. Lillywhite first came to fame with his work on the 1978's debut single of Siouxsie and the Banshees, "Hong Kong Garden" which featured a peculiar hook played by a glockenspiel. U2, who already listened to Siouxsie and the Banshees, used Lillywhite's skills to add the distinctive glockenspiel part on "I Will Follow".

Some of the songs, including "An Cat Dubh" and "The Ocean", were written and recorded in the studio. Many of the songs were taken from the band's 40-song repertoire at the time, including "Stories for Boys", "Out of Control", and "Twilight". The Edge recorded all the songs using his natural stained Gibson Explorer.
Much of the album's lyrics focus on thoughts and frustrations of childhood. Some songs, including "I Will Follow", focus on the death of Bono's mother when he was 14. "I Will Follow" was also widely perceived as a religious song affirming the band's Christian faith, though this was not confirmed until 2007 in an NME interview.[citation needed] The album also has overtones of sexuality.
The final track on the album, "Shadows and Tall Trees", gives a nod to William Golding’s novel Lord of the Flies[citation needed]; it shares its name with a chapter from the book.