I Had the Blues but I Shook Them Loose 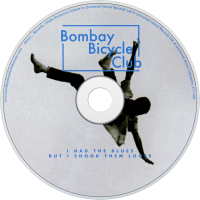 I Had the Blues But I Shook Them Loose is the debut album by London alternative rock band, Bombay Bicycle Club released on 3 July 2009. The band announced the title through MySpace and their official website on 31 March 2009. The album was recorded during October-November 2008, with long-term producer Jim Abbiss. The title comes from a line in the song "After Hours" by A Tribe Called Quest, from their 1990 album People's Instinctive Travels and the Paths of Rhythm.

Album Review
Crouch End indie sensations Bombay Bicycle Club have been wandering the indie hinterlands for a couple of years now since first forming in 2006. It was a a year wherein they won The Road To V as mere nippers (well, average age 16), and have since been picking up a host of admirers such as Jo Whiley and Zane Lowe along the way. Neither from India, renowned cyclists or much of a club, the Bombays have finally got round to a full length audio experience.
The foursome, lead chiefly by Jack Steadman and Jamie MacColl (his dad Neil is the late Kirsty's brother and son of folk legend Ewan) have been compared as a cross between McFly and The Strokes which, all things considered, is no bad thing. If someone was to claim it was the work of some obscure middle-aged Texans, it would be deemed possibly the greatest thing ever.
Produced by Jim Abbiss, who has twiddled the knobs on the likes of Arctic Monkeys, Adele and Kasabian's debuts, the marvellously titled Emergency Contraception Blues opens proceedings with a cinematic blend of My Bloody Valentineness and paves the way for album highlight, Lamplight. This, along with recent single Always Like This and the possible festival-stealing Cancel On Me, is the tune that will grab any passing punters. Like a less quivery Maccabees, there's a wisdom in their delivery that's some years ahead of their time, and suggests that by the time they get to the third album, they should be one of the finest groups in the land.
I Had The Blues But I Shook Them Loose is the sound of a band with a immense future ahead. The Bombays display a passion and songwriting skill way ahead of their fellow contemporaries. Join their club.