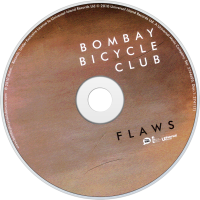 Flaws is the second studio album by British alternative rock band Bombay Bicycle Club, released on 9 July 2010 by Island Records. Contrary to the band's previous releases, the album is entirely acoustic music, consisting of versions of their own tracks as well as cover versions of other artists. The album was produced in part by guitarist Jamie MacColl's father Neil MacColl, with recording taking place in February 2009 at The Church in Crouch End, London. The band started work on the album after completing their debut, I Had the Blues But I Shook Them Loose.
Initial talks of an acoustic release began in February 2009, with the band confirming through MySpace that they were recording an acoustic EP in the Lake District, while continuing to promote their debut album. Following the completion of their debut during the same month, the band regrouped at The Church, a recording studio in Crouch End, London. The album was produced in part by Neil MacColl, guitarist MacColl's father. The rest of the album's production was completed by vocalist Jack Steadman, in Steadman's bedroom. In an interview with the Daily Record on 6 February 2010, the band revealed they had completed recording the album, with MacColl confirming "[it's] hopefully going to come out in May or June".
The album was completed in entirely acoustic music. Tracks include reworked versions of some of the band's previous releases, alongside original tracks and cover versions of other artists. Album track "Dust on the Ground" was previously recorded on the band's debut I Had the Blues.., released as the album's lead single on 29 June 2009. "Jewel" had also been previously released, as a b-side to 2010 single "Evening/Morning". "Fairytale Lullaby" is a cover of the late John Martyn (then titled "Fairy Tale Lullaby"), from his debut album London Conversation. "Swansea", the final track on the album, is a reworked version of the Joanna Newsom track of the same name.

Album Review
There was a vogue last year for second albums that were markedly different to the artists in question’s debuts. Jack PeÃ±ate, The Maccabees and The Horrors all changed direction, and mostly for the better. The latter in particular earned praise for their about-turn, from mediocre goth-rock to a tantalising blend of krautrock and post-My Bloody Valentine drone.
Bombay Bicycle Club ”“ BBC to their friends ”“ have arguably effected the most radical volte-face of all. Their first album, 2009’s I Had The Blues But I Shook Them Loose, was promising indie noise-pop, also bearing a pleasing MBV influence. Right at the end of the album, though, there was a relatively pared-down piece of poignant acoustica called The Giantess that, little did we know, pointed the way towards their second release.
Flaws, co-produced by guitarist/backing vocalist Jamie MacColl’s dad Neil (brother of Kirsty, son of folkie Ewan) and mainman Jack Steadman (lead vocals, guitar, xylophone, banjo), is almost entirely acoustic, whether it’s the original material or the covers ”“ there’s a version of John Martyn’s Fairytale Lullaby, while Swansea features lyrics from the Joanna Newsom track of the same name. Deeper investigation of BBC’s catalogue will reveal that their single B sides were often acoustic, but still, hearing a whole album of folk, blues and country-inflected ballads (apparently inspired by Harry Smith’s Anthology of American Folk Music) from the NME’s Best New Band of 2010 still feels quite odd.
Even the faster numbers are steeped in traditional music. On opener Rinse Me Down and second track Many Ways, the rhythms are gently skittering, like rustic drum’n’bass played by early 20th century farm hands. Steadman’s vocal stands out ”“ its tremulous quality may be a hangover from, as the story goes, embarrassment at being overheard singing as a kid, but it heightens the sense of an authentically troubled spirit exorcising his demons in the quietly devastating manner of a Nick Drake. On My God his voice is disconcertingly double-tracked, as though haunted by his ghostly twin. Dust on the Ground is perhaps most striking, not least because it is a folk rendition of a track from that debut album that proves how abrupt this change of direction was, not to mention how adaptable Steadman’s melodies are.