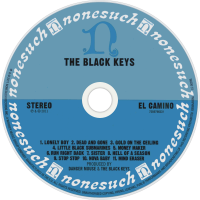 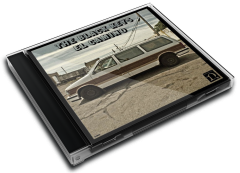 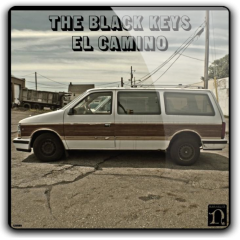 El Camino is the seventh studio album by American rock band The Black Keys. It was co-produced by Danger Mouse and the band, and was released on December 6, 2011 on Nonesuch Records. The album was recorded in Nashville, Tennessee at Easy Eye Sound Studio, which was opened in 2010 by guitarist Dan Auerbach. The record draws influences from early American music and popular genres from the 1950s-1970s, such as rock and roll, soul, rockabilly, and glam rock. Based on the difficulty the group had performing some of the slower songs from their previous album Brothers live, it conceived more uptempo tracks for El Camino. Danger Mouse contributed as a co-writer on each of the 11 songs.
El Camino was preceded by lead single "Lonely Boy", which was released in October accompanied by a popular one-shot music video of a man dancing. A faux newspaper advertisement and parody car commercial advertising the band's old tour van as an "El Camino" were used to promote the record prior to release. The album received positive reviews from critics and was ranked by many music publications as one of the best albums of the year. In the US, it debuted at number two on the Billboard 200 and sold 206,000 copies in its first week, the highest charting position and single-week sales The Black Keys has achieved in the country. The group is supporting the album with the first headlining arena tour of its career.
Through the first eight years of their career, The Black Keys had built an underground fan base through frequent album releases and near-constant touring of small clubs, but mainstream success eluded them. After the release of their critically acclaimed sixth studio album, Brothers, in May 2010, the group experienced a commercial breakthrough. The single "Tighten Up" was a sleeper hit on radio, eventually spending 10 weeks at number one on Billboard's Alternative Songs chart in the United States and becoming their first song to enter the Billboard Hot 100. The album debuted at number three on the Billboard 200 chart and sold 1.5 million copies worldwide, including 870,000 copies in the US. The band also gained additional exposure by continuing to license their songs in popular media, so much so that they were Warner Bros. Records' most-licensed band of the year. Spin named The Black Keys the "Artist of the Year" for 2010, and in January 2011, they appeared as the musical guest on American television sketch comedy show Saturday Night Live. At the 53rd Grammy Awards in February 2011, the band won awards for Best Alternative Music Album (for Brothers) and Best Rock Performance by a Duo or Group with Vocal (for "Tighten Up").
The band's sudden success proved overwhelming, as they found themselves booking additional promotional commitments and facing demand for additional touring dates. In January 2011, the group canceled concerts in Australia, New Zealand, and Europe, citing exhaustion, thus clearing out most of their touring schedule into April. Drummer Patrick Carney said, "We've been touring long enough to know when we're about to hit our breaking point." The desire to record another album soon after Brothers also led to the decision. Carney said, "We could have waited another year or so, and milked the Brothers album and kept touring, but we like bands, and our favourite bands growing up and even today, are bands that put out a lot of music and every album is different from the last."

User Album Review
If you thought the new wave of blues rock first kicked up by The Datsuns in 2002 had buried its dog, bellowed its last and done gone died around the release of The White Stripes’ Icky Thump, Ohio’s The Black Keys are here to keep kicking up that down-home desert dust. Ten years and seven albums down the lonesome lost highway from debut The Big Come Up being (wrongly) lumped in with the dense posse of Jack White wannabes, they’ve torn away from the pack, embraced modernity in the shape of fifth album producer Danger Mouse and the 2009 hip hop project Blakroc, cracked the Billboard top five and sold two million albums. They’ve even become soundtrack mainstays. Twilight? Any movie set anywhere near a Midwest dustbowl? Or featuring hick zombies? Or a half-naked starlet chained to a radiator in Tennessee in dirty pants? Meet your new go-to geezers.
They’ve achieved this, all told, by metaphorically slamming every retro button with open palms and enthusiasm. Singer/guitarist Dan Auerbach and drummer/producer Patrick Carney gunge America in the face with everything they know and find sonically comfortable, all at once. On El Camino, mariachi, C&W, gospel, psych rock, blues and soul all mash together into a warm and occasionally dazzling torrent; their appeal is less in fresh sounds as fresh composites of old ones, wrapped around classically dusty tales of errant womenfolk and addiction to love.
This seventh studio album throws up some fantastic examples: opener Lonely Boy takes base-level Duane Eddy rock’n’roll and layers on Monks synths, gospel blaze and mariachi twangs and ends up sounding invigorated and new, like The The burning alive in the Arcade Fire. Dead and Gone bristles with psych noir classicism, grisly guitar noise and glistening melodies, as if scooped from Tarantino’s scratchiest B movie nightmare. Gold on the Ceiling, all glam handclaps and Rhubarb & Custard synth splats, even does a soul-swathed Glitter stomp around the hoe-down. At times you wonder if this is an album or an all-you-can-eat Americana buffet.
For a record that rummages so excitedly through rock history, though, there’s a paucity of sucker-punch hooks here and, tellingly, it’s when The Black Keys nod to their own blues rock blueprint that they’re least engaging. Little Black Submarines is outdated blues balladry with a turgid Zep second act that seems dug up from a desert grave in 2004; Mind Eraser is a poor man’s disco remix of The Sopranos theme; and Money Maker could be, well, by The Datsuns. No, it’s in the Tornados twangles of Hell of a Season and Lonely Boy and the Supremes shimmy of Stop Stop or standout track Nova Baby that El Camino finds its identity and The Black Keys their new purpose ”“ to reinvigorate rock’n’roll from the roots up. A heftier dash of melodic sparkle to their churn of genres and next time their meat might match their might.