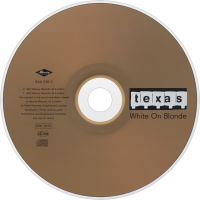 White on Blonde is the fourth album by the Scottish band Texas, released by Mercury Records in February 1997. The album was the band's first number one, and became their biggest seller. It has been certified 6 x Platinum by the British Phonographic Industry for UK sales in excess of 1.8 million copies.
In 1998 Q magazine readers voted it the 86th greatest album of all time.