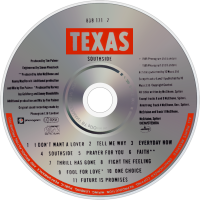 Southside is the debut album of the Scottish band Texas. It was released on 13 March 1989, and peaked at no. 3 in the UK. Within three weeks of release, the album was certified Gold by the British Phonographic Industry for sales in excess of 100,000 copies.