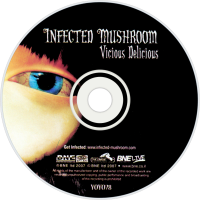 Vicious Delicious is the sixth studio album by psychedelic trance duo Infected Mushroom, released on March 26, 2007. The cover art was done by David Ho who later made a similar artwork for Seether's Finding Beauty in Negative Spaces. The album was originally scheduled to be released on 6/6/06, but the release date was postponed because, according to posts by the band on their forum, promotion had not begun far enough in advance and the parties involved decided to delay the release.

Vicious Delicious has a somewhat different sound than that of other Infected Mushroom albums, pleasing some fans and alienating others. The track "Artillery" epitomizes this change in sound, being the only hip-hop track on the album, incorporating a somewhat nu metal sound. The rest of the album contains music that can be described as an electronic hybrid of trance, psychedelic, and rock. The song "Artillery" was featured in the movie You Don't Mess with the Zohan.

Album Review
Making crossover between dance and rock music must be one of the toughest musical challenges you can take on. When DJ:s become musicians with the help of invited vocalists and guitarists, horrible things are bound to happen. The chosen few that pull off this stunt successfully are all the more laudable, but serve only to accentuate the failure of the remaining majority.
Infected Mushroom have been heading in this direction for some time, but have become stuck half way. Thus about a third of the record, the instrumental trance part, sounds pretty good, while the remaining part gets progressively worse with every flamenco or heavy metal guitar, rapper and embarrassing line of lyrics added to the mix. Some tracks, like "Special Place", hover indecisively between club sounds and rock band ambitions. The title track is the definite highlight here, an extatic piece of intensifying beat bliss.
The mass of influences used on "Vicious Delicious" does not work to its advantage. The impression is that a number of different people are responsible for the songs, and that nothing really ties them together. On the whole, singing and guitars sit very awkwardly in the music of Infected Mushroom. I realize that they are trying to widen their horizons beyond trance, but it is hard to see how they are going to manage that without losing all their strengths. The crisp, escalating rhythms of "Eat It Raw" remain so much more enticing than the primitive choruses and dry vocals of "Change the Formality".
MATTIAS HUSS - http://www.releasemagazine.net