The Captain & The Kid 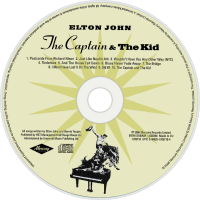 The Captain & the Kid is the 29th studio album by British singer/songwriter Elton John, released in 2006. It is his second autobiographical album with lyricist Bernie Taupin, picking up where 1975's Captain Fantastic and the Brown Dirt Cowboy left off. The Captain & the Kid chronicles the events in their lives over those subsequent 30 years.

Interscope Records announced that there would be no physical single released from this album as the emphasis is on presenting the album as a body of work. However, a radio single would be released in "The Bridge". The album's booklet has photos of John and Taupin all throughout their career, and in the lyrics section, two songs are included, "Across the River Thames" and "12", which do not appear on the music album. "Across the River Thames" was available as a free download to anyone inserting the CD into their computer. This is the first album created by John and Taupin to have them both together on the cover. This was the last studio album to feature Guy Babylon on keyboards; he died a few years later and was replaced by Kim Bullard (?). This was also Bob Birch's last appearance on any of John's solo studio albums before his own death in 2012 (Birch last appeared on Gnomeo and Juliet soundtrack).

The Captain & the Kid reached #6 in the UK, a considerable improvement over the performance of John's preceding Peachtree Road in 2004, which peaked at #21. It reached #18 in the US, before quickly falling off the charts. At concerts in early 2007, John made clear his dissatisfaction with Interscope's promotion for the album, having threatened to terminate his contract with the label.