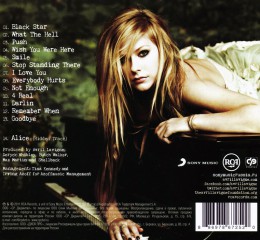 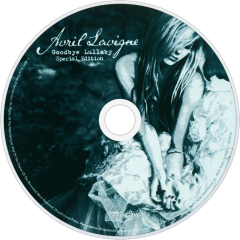 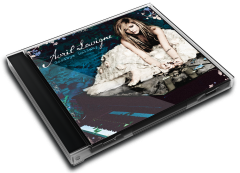 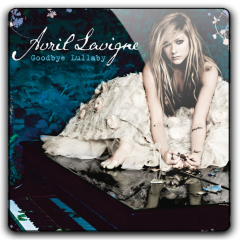 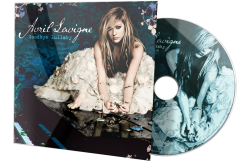 Goodbye Lullaby is the fourth studio album by Canadian singer-songwriter Avril Lavigne. The album was first released on 2 March 2011. Recording sessions began in November 2008, and took place over a period of almost two years, concluding in October 2010. The album's songs contain mainly stripped down instruments, such as the piano and acoustic guitar. Every song on the album was written by Lavigne, with half of the album being written with co-writers. The album debuted inside the top five in over 15 countries such as the United States and Canada, topping the charts in Japan, Australia, Greece, Taiwan, Korea, Singapore, Hong Kong and Czech Republic. The lead single of the album, "What the Hell", was released on 7 January 2011, and achieved worldwide chart success; reaching the top twenty in the United States and United Kingdom, the top ten in Europe and Australia and the top five in Asia. The following singles, "Smile" and "Wish You Were Here", had moderate chart success worldwide. The album also includes an extended version of the soundtrack single for the 2010 film Alice in Wonderland, titled "Alice".

The album and lead single's release dates had been pushed back several times. The album was originally scheduled for release on 17 November 2009. Later, in January 2010, Lavigne stated that the album cover had been photographed and the first single would be released in April followed by the album in June. In May, Lavigne said that she considered the album too serious and "mellow" and would return to the studio to balance the album out, "With an album, I don't want to rush it out.... I have a very serious record, so I think I need to put a couple upbeat, fun songs on it."

In August 2010, Lavigne returned to Henson Recording Studios with producer Alex da Kid. During these sessions, Lavigne had strep throat, and the people involved were required to wear surgical masks. Despite her doctor's warning, Lavigne recorded vocals, "I wasn't able to sing for the last forty-eight hours because I could do permanent damage to the vocal cords." She revealed that she had been "trying new stuff" and that she was "exploring". Lavigne added that she had enough material for two records.

User Album Review
From tomboy to rebel to self-proclaimed motherf***ing princess, it’s perhaps unsurprising that album number four from Canada’s kid sister Avril Lavigne sees her endeavour for maturity. In Goodbye Lullaby, however, she’s overshot the runway just a tad.
Where third album The Best Damn Thing was a retrograde, even contradictory move – albeit with victorious results – the candyfloss-rock lead single What the Hell would suggest Goodbye Lullaby directly snatches the baton. Not so.
Aside from perhaps the spiky, unstable Smile, which shoehorns in more needless swear words than a week’s worth of late-night Hollyoaks, the rest of Goodbye Lullaby takes a more self-effacing, earnest approach. It’s all break-up lyrics and acoustic guitars and mid-tempo musings, whilst occasionally playing up to the lullaby aspect of the title, sprinkling the whole affair with ethereal twinkles and cutesy similes.
Her well-documented divorce from Sum 41’s Deryck Whibley (incidentally, a key collaborator here) may play some part in such a development; or perhaps the sizeable dose of maturity is merely a bounce-back from the infantile inclinations of The Best Damn Thing. Either way, the theme, although well-defined, is executed with a disquieting flimsiness.
For such a laid-bare, personal album, very little of Goodbye Lullaby feels particularly authentic – plainly, there’s zero grit. Considering the natural, gut-wrenching candour conveyed by Lavigne in I’m With You (at the age of 17, no less), it’s disappointing stuff.
There are a few examples where Lavigne actually manages to communicate some real sentiment: Wish You Were Here is an unassuming strum-along, while the weighty licks and honest simplicity of Not Enough paints a picture of both its narrative and the capabilities of Lavigne as an artist.
But for the most part, the generic gushings about having you standing by my side or just wanting you to know or hearing you say goodbye could be lifted from a hundred thousand love songs by a hundred thousand singers. Whether Goodbye Lullaby was all a tad over thought, or whether she’s just holding back, the finished product falls significantly short of Avril Lavigne’s own capabilities.